Picking up where the previous story The London Hanged left off, with Tom Cox and his undead comrades loose in London, the action centres on the area of the capital known as Cripplegate, particularly Grub Street, where many a writer, publisher and poet was known to hang out.1671, in Grub Street the reeks (Tom Cox and Auld Reeky) have came to assault two young boys in their apartment. Mungo is nearby in the Bachus tavern listening to poetry (6 pages).

Tom Cox, one of the historical characters introduced in The London Hanged, was first cited in Defoe timeline in 2000 AD #1950. Sawny Douglas, aka Auld Reekie, was evoked in 2000 AD #1952. The London Spy was written by Ned Ward during 1698-1700). Two other names of real people living in Grub Street are cited, Chapman and Thomas Dangerfield. 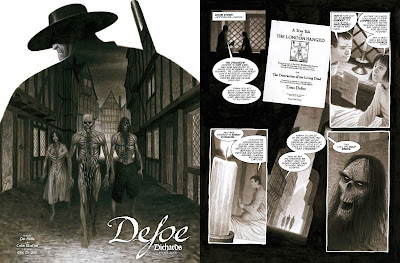